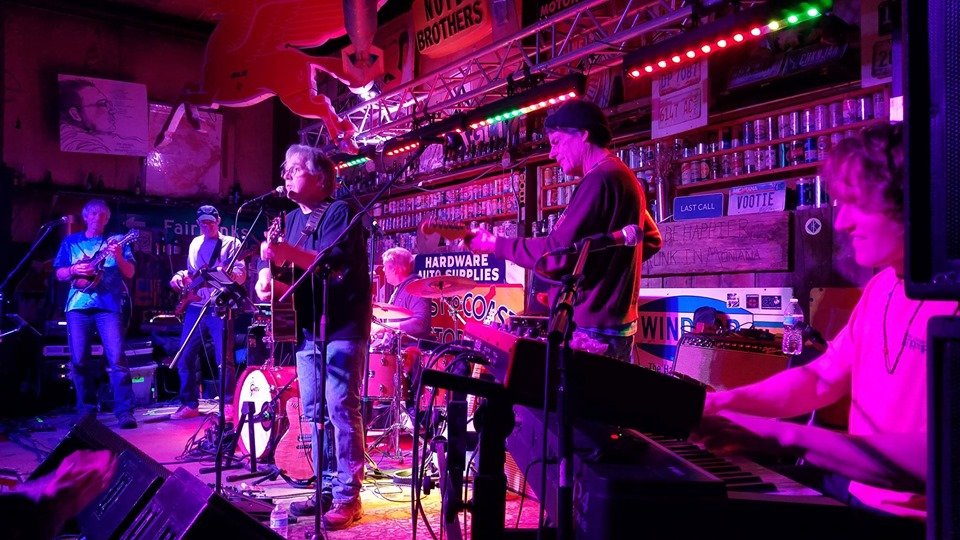 Formed in 1990, Hooligans is Montana’s longest running Americana roots rock band. Inspired by the improv driven music of the San Francisco scene as well as early folk, blues and great rock’n’roll Rich Robiscoe, Tom Garnsey and Bob Britten began gigging around Bozeman in 1982. Robiscoe and Garnsey played with Rocky Mountain faves Hyalite Blues from 1983-89 and, due to the demands that food, beer and rent soon placed on them formed Hooligans shortly thereafter.

Hooligans are celebrating the release of their debut recording BEGGARS and THIEVES this year. Produced by Little Feat founder/keyboardist Bill Payne, the recording features original material co-written by Garnsey and Payne and one from guitarist Bob Britten as well as a couple of well chosen covers from Richard Thompson, Natalie Merchant, and the late Hooligan David Troy. Of special note is “7th Daughter” a tune co-written by Bill Payne and legendary Grateful Dead lyricist Robert Hunter. The record also features guest spots from Tim O’Brien on fiddle, New Orleans own Spencer Bohren on lap steel, Jimmy Lange on keyboards and reggae great Pato Banton on vocals.

Beggars and Thieves was engineered by Grammy Award winner Cornell “Doc” Wiley and mastered by multiple Grammy winner Gavin Lurssen at Lurssen Mastering who’s credits include, Robert Plant/Alison Krauss’s “Raising Sand”, The Who, Elton John, Johnny Cash, Eric Clapton and Phish to list but a few. The basic tracks were recorded over a couple of weeks at Yellowstone House, an 1870’s log home on the banks of the Yellowstone River with the towering Absaroka- Beartooth mountains looming over the procedings.

Crowds have come to expect great Americana, rock, reggae, and blues tunes from artists as varied Bob Marley, Muddy Waters, John Hiatt, Grateful Dead, Traffic, Dylan, Hot Tuna, Van Morrison and The Band as well as lots of spirited jamming throughout. The bands sets are shaped by a genuine affection for a great song played well with lots of wiggle room for band members musical personalities to shine… Flexibility is a key ingredient in the bands success. Hooligans can shift effortlessly from sweet acoustic-based folk/rock to gut bucket blues to soaring free form jams at the drop of hat, allowing them to work in many situations with almost any audience.