ExpiredSwingin Utters and Gallows Bound (At the door) 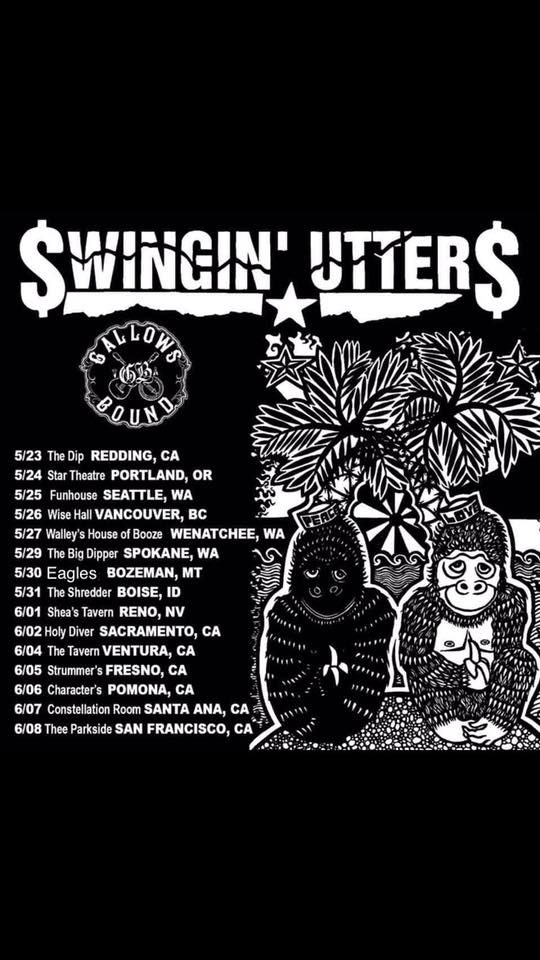 While its origin story has gone through more reboots than Batman, Superman and Spider-Man combined, punk rock has been a consistent presence on the musical landscape for more than 40 years. You might be surprised to know, however, that the Swingin’ Utters have been around for nearly as long —the band celebrated their 30th anniversary with a greatest-hits collection last year. Hell, this Bay Area street-punk band is so well-respected among their peers, there’s even a whole tribute compilation dedicated to their extensive catalog, including covers by the likes of Dropkick Murphys, Fucked Up and Teenage Bottlerocket.Since that comp came out in 2010, the Utters have issued three more full-lengths, each more fiery than the last, and now sit on the verge of releasing their ninth proper LP. Recorded at Nu-Tune Studios in Pittsburg, California, this past March by Chris Dugan (Green Day, Iggy Pop), the album is titled Peace And Love, but don’t let that fool you: This isn’t some Haight and Ashbury hippie shit. In fact, according to guitarist/vocalist Darius Koski, Peace And Love’s content is as politically outspoken as the Utters have ever been.

“This is, by far, our absolutely most political record we’ve ever done,” Koski says. “We don’t generally write very pointedly political songs. We tend to be a little more vague and abstract. But this one is pretty pointedly disgusted and pissed off and really directly attacking these fuckin’ people in office.”

“I agree it is our most political record,” remarks singer Johnny Bonnel. “When sexism, racism and nationalism is the agenda, it’s time to speak up.” Peace And Love certainly pulls no lyrical punches — we’ll give you three guesses as to who “Yes I Hope He Dies” is about, and the first two don’t count — but the Utters also keep things interesting from a musical perspective, whether it’s the Ramones worship of “E.C.T.” (think of it as the long-gestating counterpoint to “Gimme Gimme Shock Treatment”), the surprisingly melodic, Beatles-esque “Seeds Of Satisfaction” (which Koski lovingly refers to as his “surf-goth song”) or the gorgeous, haunting closing track H.L.S., written and performed by guitarist/vocalist Jack Dalrymple and inspired by the sudden death of his former One Man Army bandmate Heiko Schrepel, who passed away in 2015. “Jack actually emailed me that song several years ago, right after Heiko died,” Koski recalls. “Immediately, I knew this is the last song on the record. My only suggestion was that it started with him acoustic, then the band joins in. You don’t really hear Jack that naked ever. That song gives me chills when I hear it.”

The rebellious spirit of the Swingin’ Utters is as present as ever on Peace And Love, although the band looks and sounds a little bit different this time around, thanks to their new rhythm section of Tony Teixeira on bass and Luke Ray on drums.
“Both Luke and Tony are stellar musicians who study their work,” says Bonnel. “Luke has amazing ability, but all his drumming is tasteful—it’s never overkill. Tony managed to come up with classic bass lines that made every song a little bit stronger.”
Koski echoes Bonnel’s praise, commenting, “We love having these new dudes in the band. Tony is a really melodic, pretty player, whereas Luke is a fucking monster. Tony and Luke are best friends, and they’ve been playing together for years in other bands like Cobra Skulls and Sciatic Nerve, so that really helps.”

It’s been four years since the Utters’ last full-length, so all three songwriters in the band had a stockpile of material when they headed into the studio. That means what you’re getting on Peace And Love is the cream of the crop.
“We usually abandon songs if we think they’re shitty or filler,” Koski admits. “I still have tons of songs; Johnny does too. But we try not to make records super-long.”

Given that the last time the Utters came off a prolonged hiatus, the band ended up cranking out three full-lengths in four years, one has to wonder if Peace And Love is going to be the start of another extended burst of creativity for these punk lifers. Koski isn’t thinking that far ahead, though. In fact, he finds it hard to even enjoy the present. Even though his band has achieved three decades and nine albums together—two feats nearly impossible for most bands—Koski wrestles with his legacy a bit.

“We just keep on going,” he says. “I’m glad we’re still doing it. Johnny’s 50; I’m in my late 40s. I don’t think anything particularly new is gonna happen—we’re not gonna be on TRL any time soon. That’s fine. It’s a total accomplishment to stay together this long, but I’m a total pessimist. I should be totally grateful—and I am! But it’s hard to be a plumber when you wanna be a full-time musician. But wah wah wah—I still get paid to travel and play my songs all over the world. I’m not a millionaire, but who cares? I get to make records, and someone out there cares about them.”