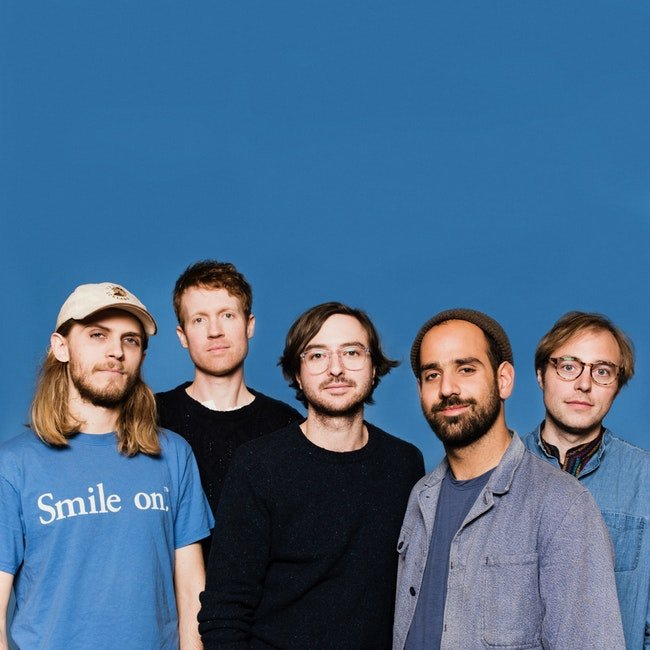 In Mind, the fourth full-length record from Real Estate, is a portrait of a mature band at the height of its power. Long respected for their deft lyrical hand and gorgeous melodies, In Mind builds upon the band’s reputation for crafting perfect songs and carries Real Estate even deeper into the pantheon of great songwriters.

On the new record, the band fine-tunes the winsome songwriting and profound earnestness that made previous albums—2009’s Real Estate, 2011’s Days, and 2014’s Atlas—so beloved, and pushes their songs in a variety of compelling new directions. Written primarily by guitarist and vocalist Martin Courtney at his home in Beacon—a quiet town in upstate New York—In Mind offers a shifting of the gears, positing a band engaged in the push/pull of burgeoning adulthood. Reflecting a change in lineup, changes in geography, and a general desire to move forward without looking back, the record casts the band in a new light—one that replaces the wistful ennui of teenage suburbia with an equally complicated adult version. The record not only showcases some of the band’s most sublime arrangements to date, it also presents a leap forward in terms of production, with the band utilizing the studio as a tool to broaden the sonic landscape of their music to stunning effect.

In Mind offers passing nods to the sanguine qualities of earlier releases while also depicting a band in a state of real change. Since the recording of the band’s last album, Courtney had become a father of two and settled into a newfound domesticity living in Beacon, while bassist Alex Bleeker made the move out to sunny California, creating a complicated new set of logistics for the band to work around. Additionally, after the departure of founding member and lead guitarist Matt Mondanile in 2015, the band—Courtney, Bleeker, and drummer Jackson Pollis–faced the prospect of either closing ranks or embracing the changes that bringing in new people would ultimately bring. “It just seemed like a good moment to move in a slightly different direction,” says Courtney, “The idea of bringing in a stranger seemed too weird, but I wasn’t interested in recording as a four-piece and having some hired gun come out to play shows with us. In the end asking Julian Lynch—who we’d already been playing with and we’ve known since high school–to join the band made the most sense. He felt like a full-time member of the band already.” This was also true of keyboardist Matt Kallman, who previously played with the band on Atlas and on that record’s subsequent tour. Joining the band in a more official capacity before the recording of In Mind, Kallman contributed in both sound and scope, writing the keyboard parts and contributing to the album’s arrangements. With a new lineup secured and armed with an arsenal of songs that Courtney and Bleeker had spent the past six months writing, the band approached the business of fleshing out the songs in an almost workmanlike manner.

“It was good being outside of the city,” recalls Kallman. “We got a little Airbnb in Beacon and we rented a practice space inside an old converted high school. We would walk to the high school and play music all day, then go play basketball, go to the health food store or go out to dinner, then go back to the house. We did that every day for, in total, about three weeks. It was nice not having the headache of our regular lives. It all felt very open, like we were planted there to do a job and that’s all we could do was just work on the songs. I think the music kind of reflects that space we were in–free and open and cautiously optimistic.”

Recorded in Los Angeles with producer Cole M.G.N. (known for his work with the likes of Beck, Snoop Dogg, Dam-Funk, Nx Worries, and Julia Holter), the eleven tracks on In Mind deliver the same kind of warmth and soft-focus narratives that one has come to expect from the band—pastoral guitars, elegantly deployed arrangements, a sort of mindful melancholy—but there is also a newly adventurous sonic edge to the proceedings. Album opener—the ebullient pop number “Darling” — announces itself with a wash of synth tones rather than guitars. Elsewhere, on tracks like “Serve the Song” and “Two Arrows,” guitarist Julian Lynch employs a variety of distorted guitar sounds that might have felt out of place on previous Real Estate records, with the latter track stretching out beyond the six-minute mark—the closest thing to a jam the band has ever recorded. The band’s predilection for crafting airtight pop songs remains in full-effect here, with songs like “Stained Glass” and “Same Sun” occupying the same kind of rarefied universe as fan favorites like “Talking Backwards” or “It’s Real.” ‘Where does one thing ever end and the next begin?’ Courtney asks in the latter, ‘I do not wish to retrace the steps I’ve taken / All that matters now is where I’m going.’

Glittering pop moments aside, the record’s most stunning moments are arguably it’s most restrained— “After the Moon” unspools in waltz-like fashion, while album closer “Saturday” offers In Mind’s most pointed take on moving beyond the fascinations of youth: ‘When a stranger is living in your old house / What does where you were born still say about you? / It’d be best to jettison what you can’t redo.’

Perhaps more than on any other Real Estate record, the lyrics on In Mind seem to reflect a struggle between youth and adulthood, the desire for escapism balanced against the increasing demands of responsibility. (‘There’s no place I would rather be right now,’ sings Courtney on “Stained Glass”, ‘I’d love to never leave but I just don’t know how.’) “I feel like it takes touring a record for a few months and playing the songs over and over for me to really start understanding my own lyrics,” says Courtney, “but so much of this record feels like it has to do with my concerns about taking care of my family. I will often walk my wife and kids to the library and then just go out on my own, wandering around the town for three or four hours and writing the lyrics in my head.” Courtney continues, “We certainly never thought this would be our lives, but now that it is, we all want to protect that and nourish it and keep it safe. I think maybe that’s what this record is about.”

As for the band’s increasingly widespread appeal, both bassist Alex Bleeker and Courtney can only theorize as to what it is about their music that seems to strike such a profound chord with listeners. “I think there’s an earnestness to what we do,” says Bleeker. “It’s coming from a truthful place of human experience, but it’s also kind of raw. It evokes something for people, even though we are often dissecting subject matter that seems super normal and undramatic, it’s also relatable. We all grew up with this common, cookie- cutter kind of American suburban experience and we can’t help but write about that. I think there aren’t a lot of people who actually write about that in a very forthright way.”

Per bassist Alex Bleeker, the songs on In Mind reflect a kind of quiet ambition on the part of the band. A desire not to reinvent themselves, but rather to just be the best version of themselves that they can be. “We’re never looking to overhaul anything in a huge way,” he says, “But we do want to grow and explore new territory and use the studio in a different way. We didn’t want to change anything arbitrarily, but it felt good to reach out into some more exploratory space while still holding on to what makes us Real Estate in the first place.”