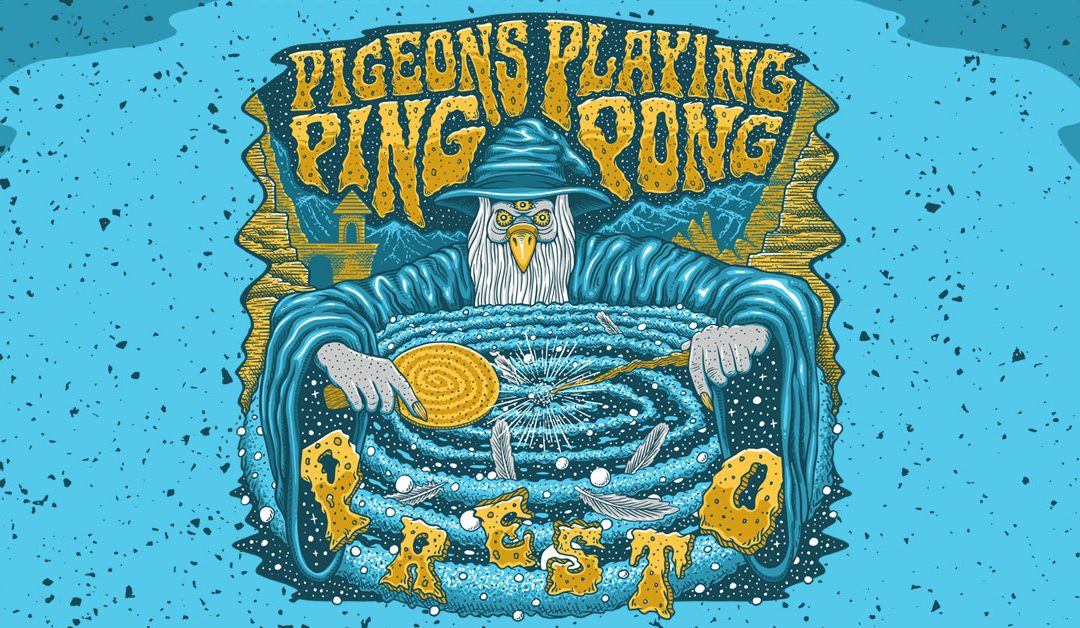 Wendesday, February 26, 2020 at The Rialto Bozeman

In the past two years alone, psych-funk trailblazers Pigeons Playing Ping Pong have co-billed at Red Rocks, played halftime at Madison Square Garden, performed on Adult Swim’s FishCenter Live, celebrated the tenth anniversary of their beloved Domefest, and even earned their first headline arena show. What’s the secret to their success? Let’s just call it “bird of mouth.”

“Our fans call themselves The Flock,” says guitarist/vocalist Greg Ormont, “and they’ve created one of the biggest, most active fan communities on the internet. Everything we do is for them, so it’s been unbelievably rewarding to watch them grow with us on this amazing journey.”

Hailed as “musical explorers” by Rolling Stone, Pigeons Playing Ping Pong first took flight roughly a decade ago at the University of Maryland, and the band has since gone on to play more than a thousand shows across 44 states. Fueled by a relentless work ethic and an ecstatic sound, the fun-loving four-piece built their reputation on epic, blissed-out concerts blending infectious funk grooves with psychedelic jams and intoxicating energy. Glide called them “a band that melts faces and pulls no punches,” while Relix praised the group as “joyous” and “dance-worthy,” and Jambase described them simply as a “powerhouse.” Acting as their own independent label, the Baltimore-based quartet has released four studio albums (including their widely-acclaimed 2017 record, Pizazz) and racked up more than twenty million streams on Spotify. They’ve quickly become festival favorites, too, performing everywhere from Bonnaroo to Electric Forest to Jazz Fest and welcoming top-tier sit-ins along the way from Marcus King and Karl Denson along with members of Vulfpeck, The Revivalists, Umphrey’s McGee and The String Cheese Incident among others. This fall, Pigeons Playing Ping Pong—Ormont, fellow guitarist Jeremy Schon, bassist Ben Carrey, and drummer Alex “Gator” Petropulos—will return to the road for some of their biggest headline shows yet in the run-up to their New Year’s Eve extravaganza at ExploreAsheville.com Arena in North Carolina.

“I think everything boils down to the live show for us,” says Ormont. “We really don’t hold back when it comes to sharing how happy and excited we are to be onstage, and that lets the audience know that it’s okay to show how much fun they’re having, too. We embrace the excitement and enthusiasm of our live concert experience with hopes of generating the kind of positivity we wish to see in the world all the time.”

When they’re not on the road, Pigeons Playing Ping Pong can almost always be found in their practice space or in the studio, writing and recording a near-constant flow of fresh material. The band’s explosive new single, “King Kong,” offers a sneak peek of what they’ve been up to lately, with lightspeed guitar work and funky horns anchored by a rock-solid rhythm section and wry, playful lyrics. It’s a big, bold sound for a band going big, bold places.

“We started doing this for fun in a college dorm room,” reflects Ormont. “Now we get to do it for fun in theaters and arenas across the country!”

Who knows where the fun will lead next? For Pigeons Playing Ping Pong and their Flock, the sky’s the limit.