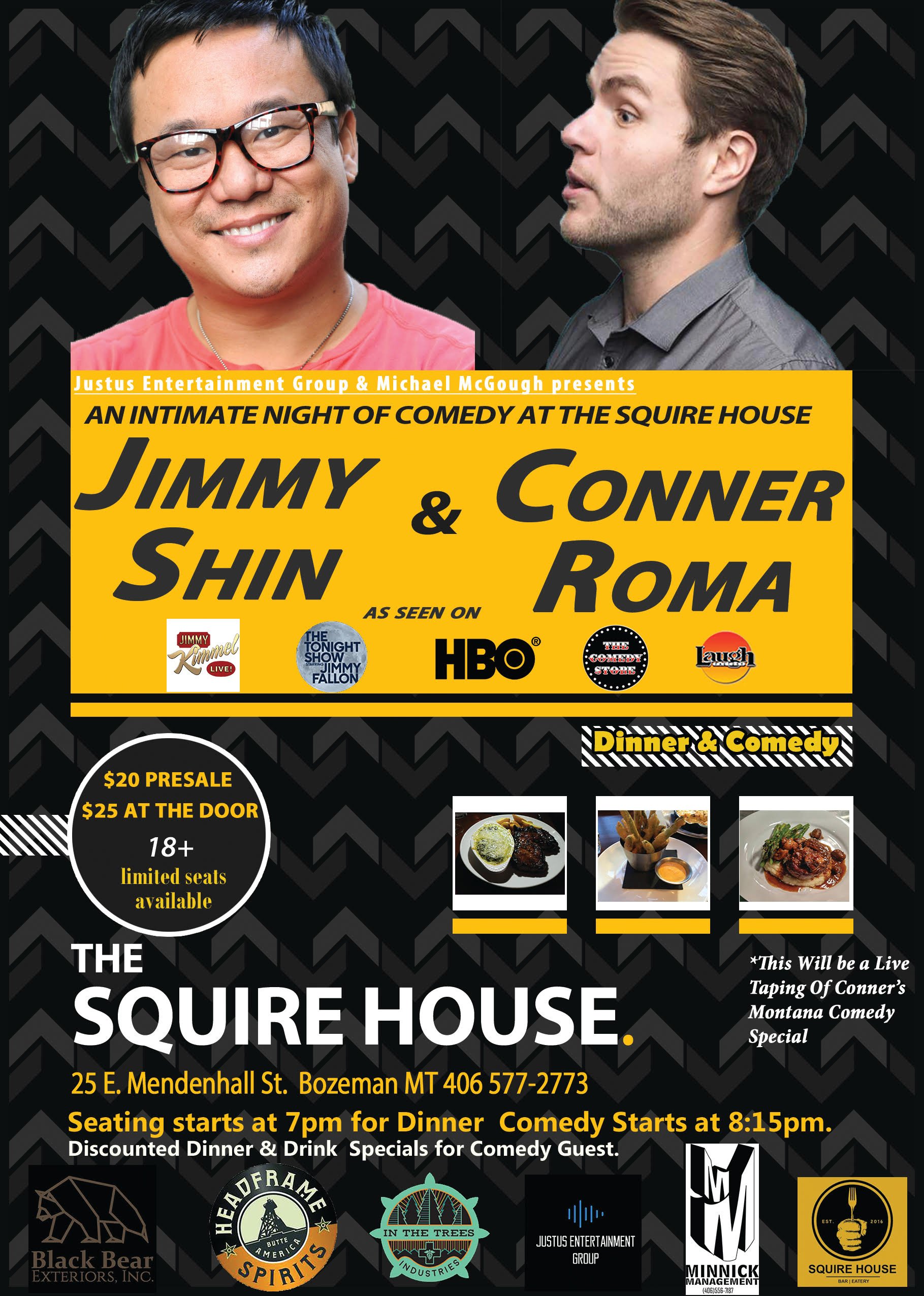 Dinner and Comedy Thursday June 20, 2019 at The Squire House

Seating starts at 7Pm for Dinner/ Comedy at 8:15

Comedy is taking over The Squire House.  Headlining will be Conner Roma and LA Based comedian Jimmy Shin who has been featured on HBO, The Tonight Show, Jimmy Kimmel and the world famous Comedy Store in Hollywood.

Stop by and see us transform The Squire House into a intimate comedy club.  There will be a special discounted comedy night dinner menu between 7-8:30.  Arrive early for best seating

Justus Entertainment  has been bringing in quality comedy for 7 years and is now teaming up with Michale Mcgough, who transformed The Baxter Hotel into one of the best comedy stops in the late 1990’s. Together we are providing an excellent dining experience and top notch comedy.

Jimmy has been Mixing his musical and comedic talents all of his life. After graduating from California Western School of Law, Jimmy decided to take a more humorous path.
While in Seattle, Jimmy won the honor of “Rookie Comedian of the Year” in the Seattle International Comedy Competition in 2005 and was advised by Ron Reid (The Producer of the competition) to move to Los Angeles. Although urged by his parents to become a lawyer, Jimmy decided to take a leap of faith and pursue his dreams of becoming a comic in LA.
After moving to Los Angeles, Jimmy has been performing all around the country and producing shows at The World Famous Comedy Store. He has performed regularly at the Improv, Laugh Factory and The Comedy Store. His break came when he performed three times on The Tonight Show.
His parents finally acknowledged that he was a real Comedian when they saw him perform on The Tonight Show and began supporting his decision to pursue a career in Entertainment. He has also appeared on the HBO Series “LUCK”, The Carson Daly New Year’s Special 2015 and most recently has released his One Hour comedy Special “Wok of Shame ” out now on Amazon Prime Video!
Conner-
Note* There will be a film crew recording Conner’s set for his Montana Comedy Special
Conner Roma started comedy in his hometown of Billings, Montana before relocating to Denver. Roma derives his humor from past experiences, like the troubles of being the chunky kid on the playground, and from small moments in his every day life. His emotional connection to his material gives Conner a very real and likable presence on stage. He has performed in clubs and festivals across the country, opening for comics such as Hannibal Buress and Doug Stanhope