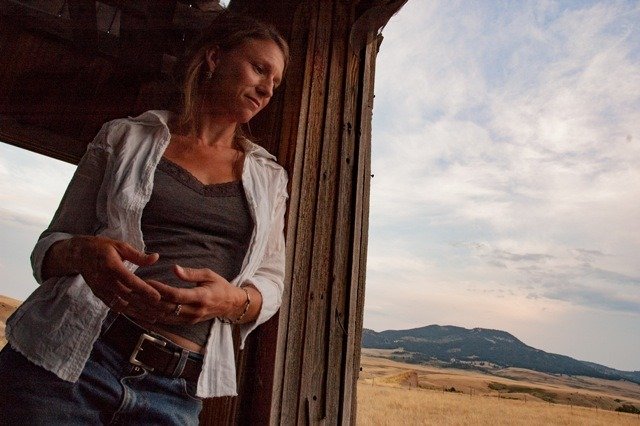 Award-winning songwriter Martha Scanlan to release new album in October The River and The Light full of moments of profound intimacy and belonging Montana-based Americana/folk singer-songwriter Martha Scanlan is set to release her fourth album, The River and The Light, on October 19, 2018 via Rock Ridge Music. Full of moments of profound intimacy and belonging, the album hosts some of the finest writing yet from the award-winning Scanlan. Produced by her longtime musical collaborator, Jon Neufeld, and recorded at Type Foundry Studios in Portland, Oregon (where Scanlan recorded her third album), The River and The Light is a journey: there is a sense of aliveness and wonder throughout each song and throughout the album, a sense of anticipation of what awaits around the next bend. The album will be available for pre-order starting on September 21, 2018, and fans who purchase the album at the pre-order stage can enjoy the first single, “Brother Was Dying,” as an instant-gratification track.

About the album title and theme, Scanlan says, “Rivers have been a theme throughout the process of working on this record; time spent in a landscape of rivers in Western Montana, exploring different narratives running through a song and the way they weave in and out of each other, the musical collaboration with Jon Neufeld and the way we sink into these deep grooves, the way music and writing occur for me as winding currents.”

The aforementioned single, “Brother Was Dying,” is also the first song on the record, and it pulses with rich electric guitar tones, somehow lush and spare all at once, the tension of so many opposites – hope and despair, intimacy and inclusion, birth and death – weaving seamlessly in and out of each other in one winding groove. Adding to the vibe of the album, the addition of haunting old-time fiddles and Cajun accordion thanks to Dirk Powell and Black Prairie’s Annalisa Tornfelt seem to invoke something ancient, something deep in the American psyche, in songs that are already layered with the complexity of belonging; this is not only a journey of the soul, but a journey of the times we are living in. Something about the sense of discovery and wonder here, even in the midst of heartbreaking vulnerability, feels essential until the last beckoning, twisted fiddle lines fade into the distance, closing out the album on “Revival.”

“Recording is always such an interesting process – the end result is always different than you anticipated – but this was much more so because we didn’t have many expectations going into it,” says Scanlan. “We had never played electric guitars together, so it was very present and playful. All of the tracks are live, some of them just one take. Jon added different elements afterwards but even overdubs for Jon are very improvisational. What was surprising about listening back to the record was this sense of being on a journey – like something we were experiencing instead of something we created, if that makes sense. It will be interesting to put it out into the world and see how it occurs for other people. I love that process of releasing a record – it’s as though it takes on a life of its own; it interacts with other people’s stories and returns changed. The songs cease to become my own and I am reminded that they were never mine to begin with.”

Anyone familiar with Martha Scanlan and Jon Neufeld’s unique alchemy on stage will not be surprised by the sense of being taken into the moment – their shows are in and of themselves a journey of improvisation; the way Jon Neufeld’s brilliant innovative guitar playing weaves effortlessly around Scanlan’s timeless songwriting is simply magical. They met playing together at Portland’s indie-roots festival, Pickathon, in 2010, shortly before recording Tongue River Stories, a beautifully stark album of field recordings captured on film at the 120-year-old family ranch where Martha was living and working in a remote corner of southeast Montana (“The Meadow” on YouTube is a stunning introduction). “I wanted to record songs in the places where they were written,” Martha says. “There is such a beautiful intimacy with the landscape in ranch work and in the place itself, stories inside of stories inside of stories.”

This exploration of place and belonging has been a long-running theme of Scanlan’s music, but really came into focus before that while being immersed in old-time music in East Tennessee. “The interwoven relationship – between music and landscape, people and stories – really impacted me, just this profound sense of belonging,” she says. “I started writing songs there, songs about my own landscapes back home in Montana. I missed them.”

After touring with the innovative, old-time string band Reeltime Travelers, those songs evolved into her debut solo album, The West Was Burning. Recorded at Levon Helm’s barn in Woodstock, New York, with Dirk Powell and Levon and Amy Helm, it was heralded as an instant classic, one of those rare albums that defies genre and generation. Dirty Linen opined, “Scanlan evokes western landscape as effectively as Georgia O’Keefe did on canvas.” Scanlan toured the country and Europe solo, with North Carolina’s Stuart Brothers, and in other various configurations, and eventually began her collaboration with Jon Neufeld. She moved back to Montana, and after her second album, Tongue River Stories, came The Shape Of Things Gone Missing, The Shape Of Things To Come, recorded mostly live in Portland, Oregon with members of Black Prairie and The Decemberists. It was a featured album by World Café’s David Dye and No Depression’s Amos Perrine.

While currents of deep Appalachian mountain valleys and vast Montana landscapes wind through Scanlan’s songs, it’s really the accessibility and intimacy that defines them, and how they seem to find their way onto soundtracks by T Bone Burnett, pages of celebrated American novelists like Rick Bass (“For A Little While”) and Joyce Carol Oates (“Little Bird of Heaven”), shared mixes by Emmylou Harris, covers by roots musicians from Sarah Jarosz to Andrew Marlin to Solas, quiet song circles and camp fires. “They all seem to end up being songs about the human experience,” Scanlan explains.

Scanlan has collaborated and shared the stage with a variety of roots musicians, including Alison Krauss, Emmylou Harris, Levon Helm, Ollabelle, Black Prairie, Ralph Stanley, and Norman and Nancy Blake. She is planning several album release shows, in Portland, Oregon, and Missoula, Montana (details and dates to be announced soon), and she is also slated to perform multiple time at the Sisters Folk Festival in Sisters, Oregon on September 7th and 8th.