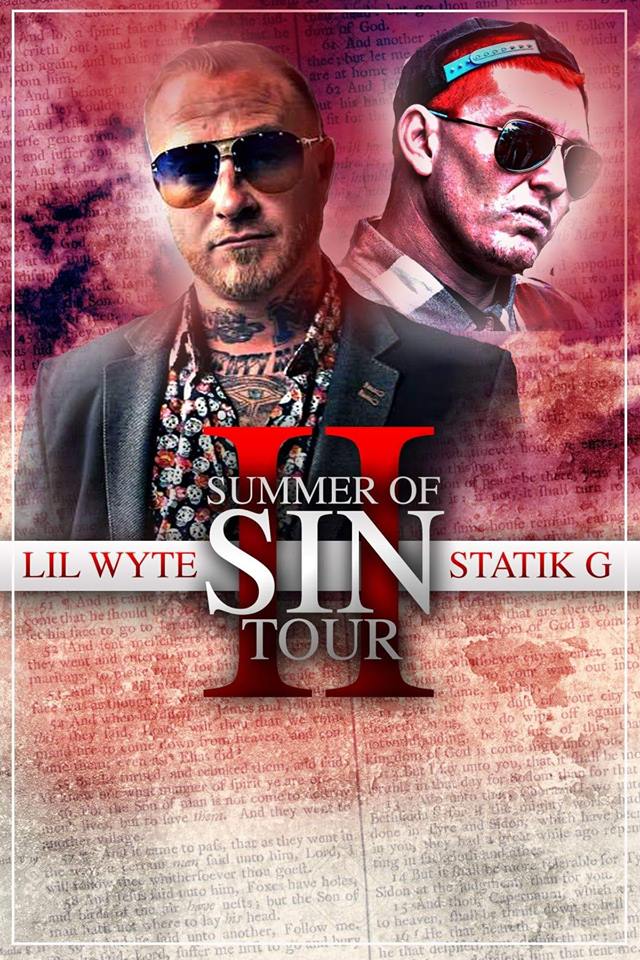 Monday July 22, 2019 at The Buffalo Jump Sports Bar HAS BEEN CANCELLED

***THIS EVENT IS 18+ ONLY! DO NOT PURCHASE TICKETS IF YOU ARE UNABLE TO ATTEND. NO REFUNDS OR EXCHANGES ON TICKETS, NO EXCEPTIONS***

Independence is the name of the game for veteran rapper Lil Wyte. After more than a decade in the spotlight, the Memphis songwriter has amassed legions of fans worldwide, and consistently attracts new listeners from his catalog of intense solo and collaborative albums. Lil Wyte is now in the perfect position to cement his musical mark for the rest of his career. Lil Wyte & Frayser Boy “B.A.R.” album, plus Lil Wyte & Jelly Roll “No Filter” are NOW available at Best Buy NATIONWIDE!!!

Widely known as Statik G or Statik Gesus (previously known as Statik the Godfather), the young turk rose from the underground with his first EP in 2007, named “Only if I’m Stoned” which became the first of many steps to the ascension of Statik’s music career. His music usually focused on sex, drugs, and his upbringing in poverty and began catching attention. In 2008, after writing music for 6 years and primarily pushing music online, he was invited to his first live performance.
October 10th, 2008 marked his start working with Death Lab Productions in Casper, WY. With his next project, more of a mixtape, he represented his style in a very diverse, mixed up delivery. The mixtape was called Underneathe the Underground and was completely engineered, written, and flowed by Statik G. After selling out of shirts, mixtapes, and more merch, Statik G got with MC Viruz and later with Biskit and BIG Murda forming the first WY act to perform at the Gathering of Juggalos: PRESCRXPTION. Statik dropped America’s High with PRx before they began focusing on their solo careers.
Statik Attack was released next, a mixtape featuring all the solo music Statik created while hitting shows with Death Lab and was his first independent release since leaving the label. “Poppa Pill”, one of Statik G’s many aliases, put his heavily drug influenced music behind him and began seeking something more fulfilling. Due to legal troubles, drug problems, and multiple other life issues, he left everything behind and moved to Denver, CO. While focusing on his life, working and going to college, he began considering putting music on the back burner. Never able to leave it alone for long, Statik G wrote the entire Slightly Sober album.
Unexplainably to this day, Statik ended up puking for 4 months straight, lost his job and was forced out of school before being left homeless in Denver, and was forced to head to WY to restart all over again. He was sure that the universe was sending him a rude awakening, that music was his calling. Statik G entered The Statik Age when he dyed his hair red for the first time since 2010 and revived his solo career with Slightly Sober’s release and a slew of underground touring with LSP and Gritty Musick after moving back to Denver, CO.
With his success on the road, he saw potential in old friends and started the label that would later become RhymeSick. Statik G was known as a touring machine by now and was signed by LSP as an artist right before releasing The Bad Guy, his next entry in The Statik Age. Statik Gesus aka The Red Devil’s debut LSP project would turn heads all over the world. All Out of Normal: Act I dropped in 2016 and cemented his place in the underground. His evolution is rapid and the tormented artist is always refining, and redefining his style. Future projects are flowing in, as well as more shows than ever, and recently he’s been headlining tours around the United States.
Statik G’s not only toured 10+ times, he’s headlined multiple national tours and has opened for the Gathering of Juggalos, Tech N9ne, Violent J, Twiztid, Bone Thugs n Harmony, T-Pain, The Game, ABK, AMB, Yin Yang Twinz, DJ Unk, Paul Wall, Baby Bash, Gray Skull, Great White, Rittz, Esham, Hawthorne Heights, Flatlinerz, Apathy, Celph Titled, Doomzday, Hed PE, Johnny Richter, Brotha Lynch, LSP and Slo Pain, as well as many others. More recently, Statik G has continued following the Statik Age, preparing All Out of Normal: Act II and Terrorist for their release. Statik Gesus is the truth, and nobody can deny his talent. Welcome to the Statik Age.