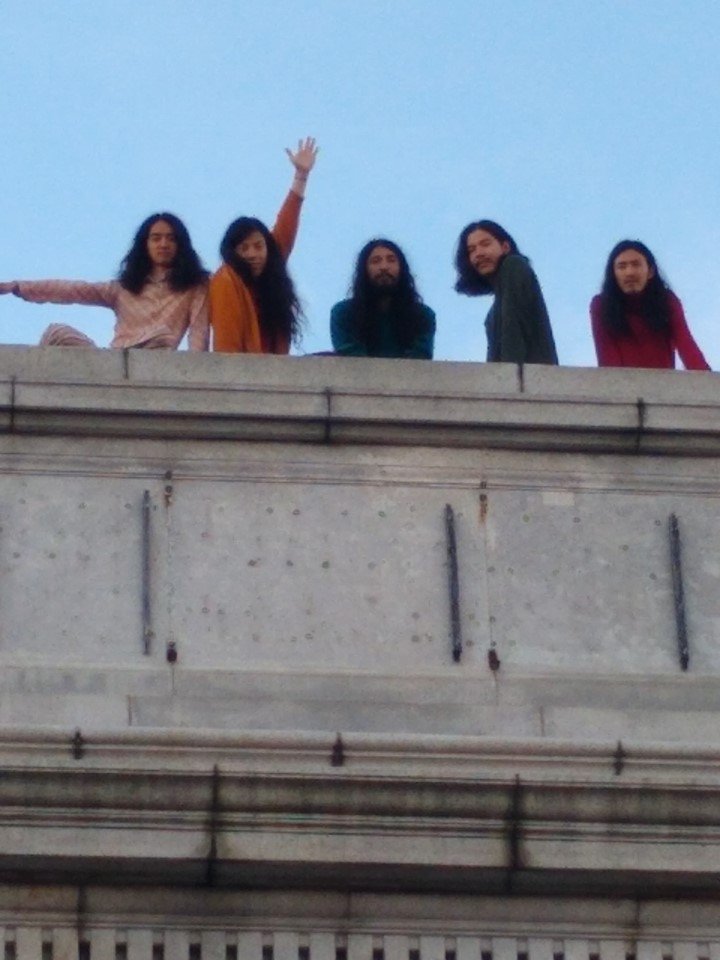 Monday November 25, 2019 at the Filling Station

“Masana” is a fictional word created by Kikagaku Moyo to express a Utopian feeling; an existence where everything can interact harmoniously and offer inspiration and understanding. Their fourth album Masana Temples radiates this vision, architecting a vibrating world that isn’t confined to the known limits of what came before it.

Kikagaku Moyo progressed from early days in Tokyo’s experimental scene to traveling the world with their mind-bending sounds, exploring different facets of psychedelia on each new release and blowing minds with a live show that was just as searching as their records. The shifting dimensions of Masana Temples are informed by various experiences the band had with traveling through life together, ranging from the months spent on tour to making a pilgrimage to Lisbon to record the album with jazz musician Bruno Pernadas. The songs came together in the wake of the band breaking up the communal house most of them had shared in Tokyo, with some members relocating to Amsterdam, and others moving to different parts of Japan. Transitioning from being based in the scene they had roots in to scattering around various locales made for an even more enhanced understanding of how mystically connected the sum of their parts were when the band reunited to record new material. The music is the product of time spent in motion and all of the bending mindsets that come with it.

The band sought out Pernadas both out of admiration for his music and in an intentional move to work with a producer who came from a wildly different background. With Masana Temples, the band wanted to challenge their own concepts of what psychedelic music could be. Elements of both the attentive folk and wild-eyed rocking sides of the band are still intact throughout Masana Temples, but they’re sharper and more defined. Without sacrificing any of their experimental impulses, songs are more composed and cohesive. Pernadas’ bright production meets with nearly telepathically locked-in performances, on both lazy cloud-like jaunts like “Nazo Nazo” or fuzzed-out expeditions like lead single “Gatherings”. Drummer/vocalist Go Kurosawa, guitarist/vocalist Tomo Katsurada, bassist Kotsuguy, sitar and keyboard player Ryu Kurosawa and guitarist Daoud Popal Akira act as a unit, with an intuitive attention to space and dynamics that could only come from years of playing together in every imaginable setting.

More than the literal interpretation of being on a journey, the album’s always changing sonic panorama reflects the spiritual connection of the band moving through this all together. Life for a traveling band is a series of constant metamorphoses, with languages, cultures, climates and vibes changing with each new town. The only constant for Kikagaku Moyo throughout their travels were the five band members always together moving through it all, but each of them taking everything in from very different perspectives. Inspecting the harmonies and disparities between these perspectives, the group reflects the emotional impact of their nomadic paths.

Coming together in a way more deliberate than the beautifully floating improvisations of their Stone Garden EP or the sometimes hushed dreamstate of 2016 album House In The Tall Grass, Masana Temples is focused and clear in its vision in a way that feels unlike any of Kikagaku Moyo’s earlier sounds.