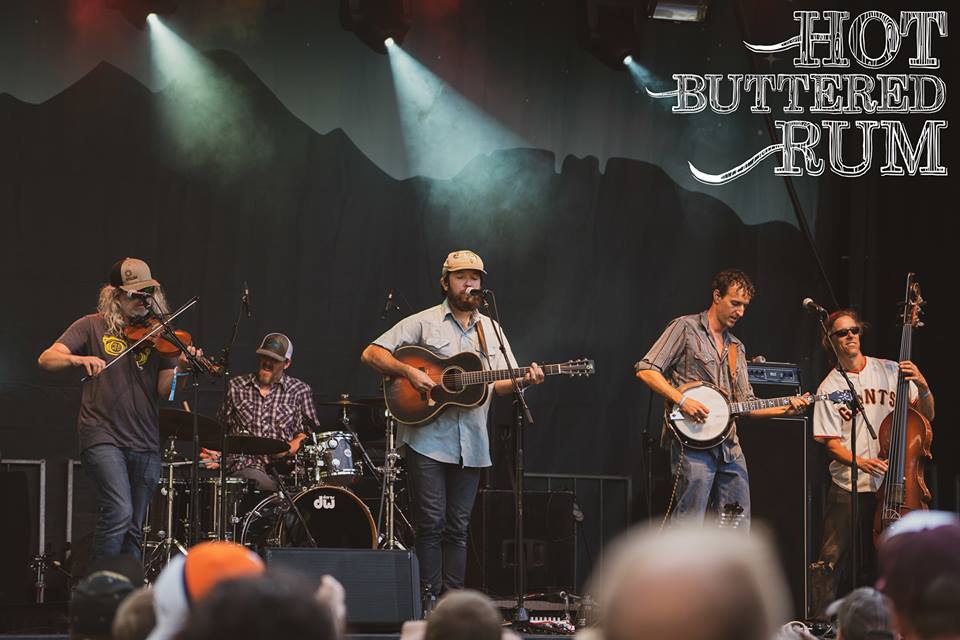 SAN FRANCISCO, CA — For nearly two decades, Hot Buttered Rum has attracted a truly multi-generational audience across the States with their high energy and fun-loving performances that showcase their stunning instrumental and vocal ingenuity. Hot Buttered Rum is excited to independently release Lonesome Panoramic, their sixth studio album, on July 20, 2018. Self-produced, Lonesome Panoramic was recorded at Panoramic House Studio in Stinson Beach, CA, along the Panoramic Highway with majestic views of the western Marin County coastline. “Lonesome Panoramic is the result of different thematic and stylistic threads that Butter has been chasing over the years: driving uptempo stringband tunes, layers of dark lonesome drum grooves, letting things go, and embracing what we have,” says HBR’s Nat Keefe.
The band’s two vocalists and songwriters, guitarist Nat Keefe and multi-instrumentalist Erik Yates (mainly 5-string banjo, also resonator and acoustic guitars), take turns leading each of the 13 well-crafted originals on the album. Rounding out the band, Bryan Horne delivers, in true athletic form, his talents on upright bass along with charismatic fiddler and harmony vocalist Zebulon Bowles and drummer/percussionist/mandolinist James Stafford, providing a warm and solid rhythmic foundation.
Yates says, “Making music on the Panoramic Highway carried a lot with it for me. It’s one of the roads I grew up driving, towards the ocean, the mountain, the woods, and, eventually, back home again. I hope some of these tunes can do the same for the listener.”
Much of Hot Buttered Rum’s music is inspired by the northern California landscape and Lonesome Panoramic conveys a broad range of what Hot Buttered Rum offers. The album kicks off with a pair of buoyant bluegrass tunes, opening with their more traditional lineup of guitar, fiddle, banjo, bass, with Stafford forgoing the drums for mandolin. They change the pace a bit on the third track, “Country Tunes & Love Songs,” adding in drums for this mid-tempo Americana rocker; it is one of a few songs on the album where Yates trades his banjo for the Dobro; another is “Treasure Island Blues.” Peaceful and reflective, “How Short the Song” is performed as a trio with velvety string arrangements, while “When that Lonesome Feeling Comes” is a more lively ragtime boogie gospel.
With Lonesome Panoramic, Hot Buttered Rum wades the full width of the river from the shoals to the deep waters with a passionate, laid back attitude and they are thrilled to share this new album with the world.