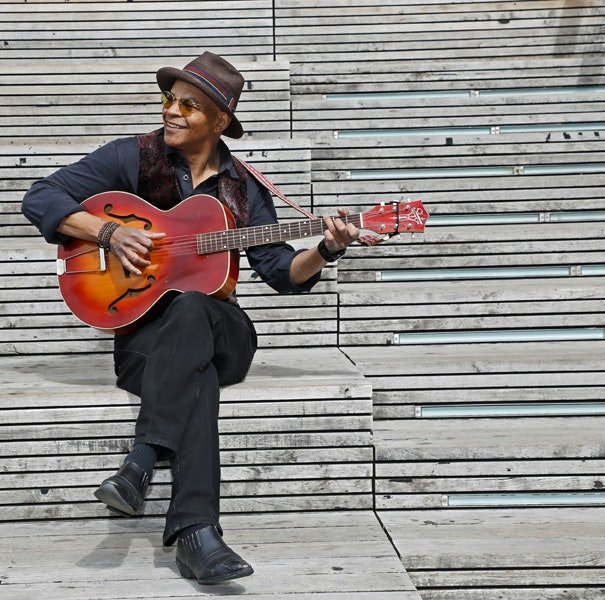 Guy Davis: An Ambassador Of The Blues
Guy Davis once said, “I like antiques and old things, old places, that still have the dust of those who’ve gone before us lying upon them.” Blowing that dust off just enough to see its beauty is something Guy has excelled at for over twenty years of songwriting and performing. It’s no wonder his reverence for the music of the Blues Masters who’ve gone before him has been evident in every album he’s ever recorded or concert he’s given.

Guy has had his musical storytelling influenced by artists like Blind Willie McTell and Big Bill Broonzy, and his musicality from artists as diverse as Lightnin’ Hopkins and Babatunde Olatunji. However, there’s one man that Guy most credits for his harmonica techniques, by stealing and crediting from him everything that he could, and that man is the legendary Sonny Terry.

Guy’s new album, Sonny & Brownie’s Last Train – A Look Back at Brownie McGhee and Sonny Terry, is an homage to these two hugely influential artists, not only on Guy’s career, but to thousands of musicians around the world. One such artist is the Italian harmonica ace, Fabrizio Poggi, who collaborates with and produced this recording.

Recorded in the summer of 2016 in Milan, the album features the original, title track song written by Guy Davis, songs by both Sonny and Brownie, as well as songs known to have been recorded and performed by the famed duo written by their contemporaries, such as Libba Cotton and Leadbelly.

Guy and Fabrizio have a relationship going back a decade in which they’ve performed together on tour in Europe and in the United States. In 2013 Fabrizio produced and played on Guy’s highly acclaimed recording, Juba Dance, which was number one on the Roots Music Charts for eight weeks. And ‘Fab’ also performs on Guy’s last album, Kokomo Kidd.

Guy Davis has spent his musical life carrying his message of the blues around the world, from the Equator to the Arctic Circle, earning him the title “An Ambassador of the Blues”. His work as an actor, author, and music teacher earmark him as a renaissance man of the blues. What music and acting have in common, he explains, “is that I don’t like people to see the hard work and the sweat that goes into what I do. I want them to hear me and be uplifted.”

When Guy Davis plays the blues, he doesn’t want you to notice how much art is involved. “It takes work making a song that’s simple, and playful, and easy to do,” he says. “And I don’t want people to see that. I want some little eight-year-old kid in the front row to have big eyes and say, ‘Hey, I want to do that!’.”

Davis’ much-praised 1995 debut, Stomp Down the Rider on Red House Records, marked the arrival of a major talent, earning acclaim for his deft acoustic playing, his well-­‐traveled voice and his literate, yet highly accessible songwriting. He’s barely rested since then, taking his music to television (the Conan O’Brien and David Letterman shows) and radio (A Prairie Home Companion, Mountain Stage, World Cafe, E-Town), as well as performing at theaters and festivals. And he’s played the four corners of the world, with a recent tour taking him from the Equator to the Arctic Circle. He played the Ukraine in summer of 2014, just a week or so before the statues of Lenin were torn down. He even played for the visiting Queen of Denmark when he performed at a children’s home in Greenland. “I feel like I’ve only hit three corners of the world, with a lot more to go,” he says. “I seek to communicate no matter where I go. When I play in non-English speaking countries I play more of the classics—Robert Johnson, Blind Willie McTell. And I may tell fewer stories, but sometimes I can get away with it because the words sound like music.” Above all he’s looking to bring people together through music. “With the world falling apart it’s up to all of us to be ambassadors and to spread the music everywhere we can. There’s nowhere that I don’t want to play.”

His parallel careers – as a musician, an author, a music teacher and a film, television and Broadway actor – mark Davis as a Renaissance man, yet the blues remain his first and greatest love. Growing up in a family of artists (his parents were Ruby Dee and Ossie Davis), he fell under the spell of Blind Willie McTell and Fats Waller at an early age. Guy’s one-man play, The Adventures of Fishy Waters: In Bed With the Blues, premiered Off-Broadway in the ‘90s and has since been released as a double CD. He went on to star Off-­‐Broadway as the legendary Robert Johnson in Robert Johnson: Trick The Devil, winning the Blues Foundation’s “Keeping the Blues Alive” award. He followed the footsteps of another blues legend when he joined the Broadway production of Finian’s Rainbow, playing the part originally done in 1947 by Sonny Terry. Along the way he cut nine acclaimed albums for the Red House label and four for his own label, Smokeydoke Records; and was nominated for nearly a dozen Blues Awards.

So it’s no wonder that Davis is reluctant to define himself simply as a bluesman. “To me, a bluesman is somebody who has to carry a knife or a gun and enter dangerous situations and sometimes fuel it with alcohol—That’s not who I am. I call myself a blues musician, and to me the blues is a broad title. I include some ragtime, I make a nod to New Orleans, and a nod to the fife and drum players. And I always include things that make you want to dance.”

Sonny & Brownie’s Last Train comes out on the heels of Kokomo Kidd, Guy’s twelfth studio album and his follow-up to the stripped-down, critically acclaimed 2013 release Juba Dance, produced in Italy by Fabrizio Poggi. As always he combines modern with traditional blues, the somber and the celebratory. And for him it represents a jump into new territory. Kokomo Kidd was the first time I’ve produced myself,” he points out. “I stepped up to the plate, put the cash on the barrelhead and said ‘Let’s make this happen.’ What I‘m showing here is a side of me that’s deep inside. It’s needing air and light, and here it comes! For this new album, I let Fabrizio take charge as it was really mostly his idea.”

The rollicking title track, featuring Ben Jaffe of New Orleans’ Preservation Hall Jazz Band, might be called a short story that you can dance to, featuring a rascal character who starts as a bootlegger and winds up a Republican advisor. “It’s sort of a demented celebration of corruption,” Guy says. “The Kidd represents all the forces that operate on the margins of society. That song says something about who I am, because I just don’t follow blues musicians, even though they’re very dear to me. But another one of my influences is someone I’d consider America’s modern Shakespeare, and that’s Garrison Keillor.”

Guy has been asked a lot lately about a song on his last album, Kokomo Kidd, which he produced. Part of the “I Wish I Hadn’t Stayed Away So Long” influence comes from one of Davis’ mentors, folk legend Pete Seeger, and the sense of loss. He explains, “I was on Pete’s last official tour in 2008, witnessing with my own eyes something I’d heard since I was a child. Folk music was the doorway that I came into the blues from. And I want people hearing the song to know that life is precious, and that the road is not always an easy place to be.”

Continuing his mission to spread the blues around the world, Guy has lately been doing more teaching. “I’ve had beginning and intermediate students, and I try to give them enough of the basics that they can go into a jam session, and create more licks out of the ones they know. And I try to give them a bit of my philosophy. To my mind you can treat these songs as recombinant DNA, you can own it and you can create something new with it. And I didn’t sign any papers, but I can claim an ownership to the blues.”