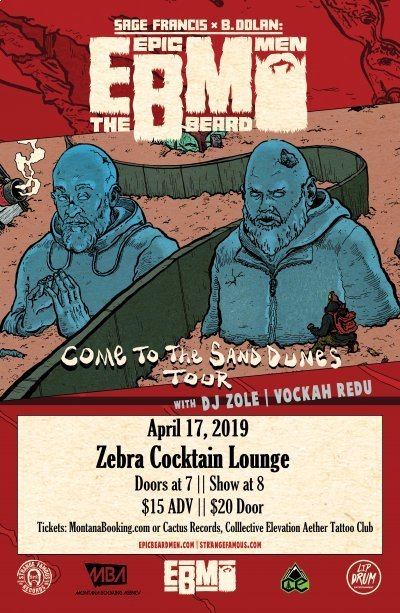 The Zebra Cocktail Lounge is your source for the best nightlife, dance club atmosphere, drinks, beverages and entertainment to be found in southwest Montana. Our underground nightclub in the basement of the historic Bozeman Hotel at 321 East Main Street is your party playground destination, and a hot spot for fun opportunities and exciting live music shows in Bozeman, MT.

Indie-rap powerhouses SAGE FRANCIS and B. DOLAN are the “EPIC BEARD MEN,” a lyric-heavy, stage-smashing super duo hailing from the sand dunes of Providence, Rhode Island. EBM toured the world in support of their “SEASON 1” EP (released in early 2018) and spent the second half of the year putting the final touches on their debut full-length album, which drops on STRANGE FAMOUS RECORDS in late March 2019.

They will be supporting this project with the “COME TO THE SAND DUNES” TOUR, yet another worldwide excursion which kicks off in the US this April and May. This time, they’ll be backed by the turntable wizardry of SoCal’s DJ ZOLE (Four Finger Ring, Project Blowed.) Opening the show will be VOCKAH REDU, an originator of the New Orleans Bounce scene returning to the national stage. This one-of-a-kind emcee delivers a theatrical live set that delivers nonstop beats, choreography, call & response, costumes, spoken word and skits that must be seen to be understood.

The stark contrast in style between the opener and closer is guaranteed to give the audience more than one would expect from a typical hip-hop show. Expect a full “holy crap that was effing crazy” experience. Once in a lifetime, folks. Come to the sand dunes.