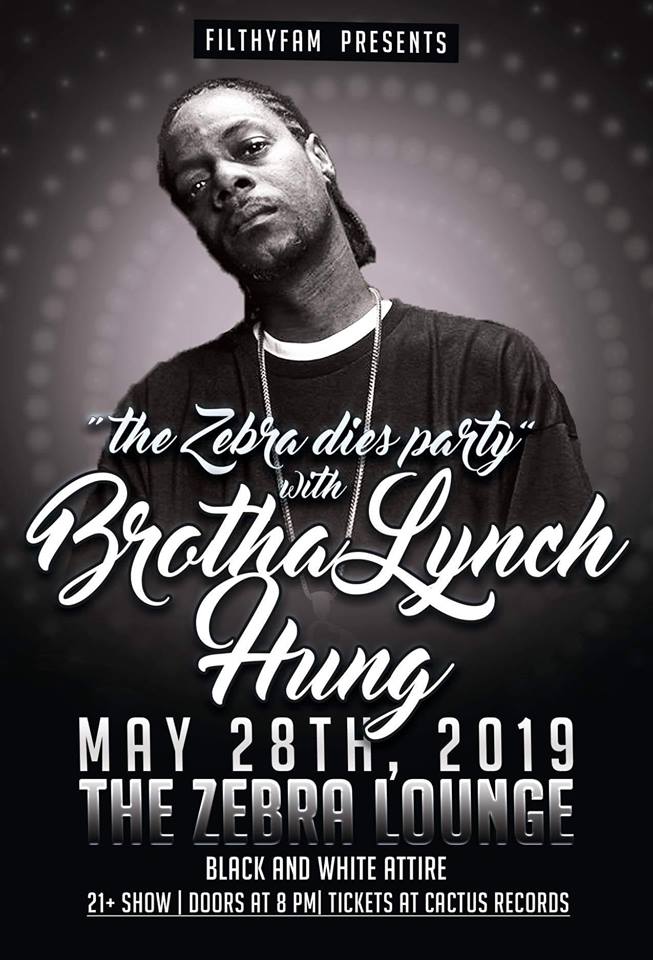 Black and White Attire is recommended

$20 Tickets available at the door

Hip-hop ambitions are often described in terms of “hunger”, but no known MC has an appetite quite like Brotha Lynch Hung. This is not simply the peckishness of a seasoned artist still making music while his former contemporaries have long passed their sell-by date. This is the ravenous hunger of Mannibalector, Brotha Lynch Hung’s flesh-chomping, gore-streaked altered ego and the antagonistic protagonist at the dark heart of Coathanga Strangla, the genuinely stunning new album by Brotha Lynch Hung.


Coathanga Strangla re-introduces listeners to the not so nice but strangely sympathetic guy they met on Lynch’s 2010 album Dinner and a Movie. The “autocratic automatic reaper” instantly joined the entertainment biz pantheon of indelible killers like Mannibalector’s cinematic predecessor, Silence Of The Lambs sicko Hannibal Lector. “I watch a lotta horror movies and I really love meat,” says Lynch, “so I put that together and out came Mannibalector.”


Longtime fans will, of course, recognize these deviant tendencies. Brotha Lynch Hung’s 1993 debut, 24 Deep (Black Market Records) found his “human meat pot luck” already underway (who can forget the image: “find your brain cookin’ in a barbecue pit”?). The 1995 release of the Sacramento (CA) native’s certified Gold classic, Season of da Siccness, followed and Lynch has released a steady stream of music ever since, making him an ideal match for the do-or-die work ethic of his current label home, Strange Music.

Kansas City-based Strange Music is currently the most successful outfit in independent hip-hop and home to Tech N9ne. Dinner and a Movie was Lynch’s first album released by Strange, but Tech N9ne and Brotha Lynch have history: Tech appeared on “187 On A Hook” from Lynch’s Blocc Movement in 2001, and in 2006 Lynch delivered a standout verse on “My World” from Tech N9ne’s Everready album. “Strange Music understands me, they’ve really given me a fresh start,” says Lynch. “As strange as it sounds, I feel like I’m just getting going with my career.”

Make no mistake however: what feels like a fresh start for Lynch is coinciding with a high point in his artistic evolution. Always one to look to movies for inspiration, Lynch says that repeated viewings of the Hostel films had a direct effect on Coathanga Strangla. “Some horror movies are too ridiculous,” he says, “but Hostel has a very realistic feeling. It’s not scary like boo! — it’s more like this could happen. That’s an authenticity I’m going for in my music.”

It’s that sense that gives Coathanga Strangla its compelling core. With its bowel-bothering bass line and toothpick percussion (courtesy of producer Michael “Seven” Summers), “Mannibalector” is a cannibal lecture (replete with requisite slaughter) the reveals the crucial facet of Lynch’s artistry: his alter ego is not a two-dimensional creation but a character full of humanizing doubts, fears and paranoia. Allmusic.com‘s David Jeffries has noted Lynch’s facility at going “from gross to scary to sympathetic and personal, and then back again, all without losing a step or trying your patience.”

When it comes to digesting Lynch’s art however, it helps that his raps are leavened by what can only be called “gallows humor.” Who else would refer to his manner of cooking victims as “Operation McPasta”, as Lynch does on the new album’s “Mannibalector”? While Brotha Lynch Hung is often credited as the originator of the rap genre known as “horrorcore”, most so-called horrorcore rappers would be content with a standard disemboweling; Lynch goes all the way, a meal plan immortalized on the new album’s “Spit It Out” wherein Lynch chortles: “If anything taste funny spit it out.”

“Friday Night” features Lynch’s fellow rap madman C.O.S., thumping production by Michael “Seven” Summers, and Brotha Lynch’s “body sweatin’ like a Juggalo.” “I love the Juggalos man,” says Lynch of the cult-like, face-painted fans who have embraced him. “They’re good people with good hearts who are looking for an outlet from life’s pain. I can relate to that.” Standout cut “Blinded By Desire” is a sadistic travelogue following Lynch as he drives from California’s Bay Area southward towards Los Angeles (“524 miles to SoCal…” begins Lynch) where mayhem will undoubtedly ensue.

Coathanga Strangla is the middle album in a conceptual trilogy, which began with Dinner and a Movie and is slated to conclude with 2012’s Mannibalector. Each of the three albums has spawned three videos, which together will comprise the visual document of the terrifying times of Mannibalector. “The three albums and nine videos are about a rapper who’s having a bad life and is about to give up on the world,” explains Brotha Lynch Hung. “You can hear he’s about to walk the thin line, past the thin line, and then go way over it.”

Join Brotha Lynch Hung as he continues to obliterate that line like no other artist can do.