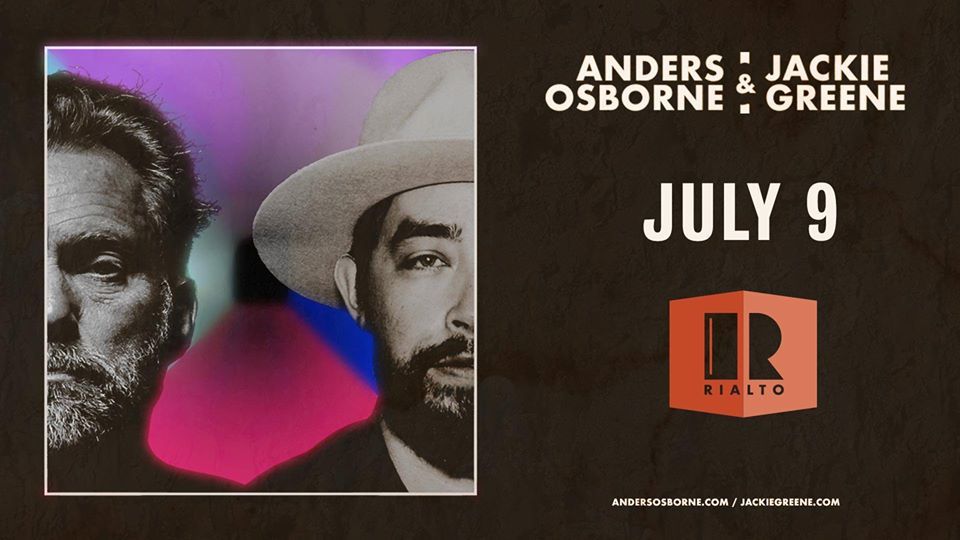 Thursday, July 9th at The Rialto

Not too long-ago, Anders Osborne and Jackie Greene were booked to do a few solo acoustic shows together. One thought, and the other agreed, that the shows would be a helluva lot more fun if they joined together and did them “in the round.” For two friends that are gifted as both singer-songwriters and guitarists—impromptu “jamming” is second nature. But for these shows, they’ve ditched their bands for some stripped down acoustic performances, each taking a turn with one of their songs, while the other provides accompaniment.

It was a great experience for each of them and audience alike and Jackie and Anders are excited to continue this sit-down evening of old fashioned tune trading.

Jackie Greene has been chasing his muse ever since his teenage years, when he released his critically acclaimed independent debut, signed his first record deal and began a lifetime of touring that would see him supporting the likes of BB King, Mark Knopfler, Susan Tedeschi, and Taj Mahal, in addition to gracing festival stages from Bonnaroo to Outside Lands. The New York Times hailed his “spiritual balladry,” Bob Weir anointed him the “cowboy poet” of Americana and blues, and the San Francisco Chronicle raved that he has “a natural and intuitive connection with… just about any musical instrument.”

While Greene’s songwriting chops were more than enough to place him in a league of his own (NPR’s World Café raved that his “sound seems at once achingly intimate, surprisingly energetic and unburdened by adherence to genre”), Greene also emerged as a singular singer and guitarist, prompting Rolling Stone to praise his “honeyed tenor” and name him among “the most notable guitarists from the next generation of six-string legends.” Between studio albums and his own tours, Greene took up prestigious gigs playing with Phil Lesh & Friends, The Black Crowes, Levon Helm, and Trigger Hippy, his supergroup with Joan Osborne.

“As artists and writers, I think we’re all just sort of amalgamations of what we listen to and what we do,” Greene says of his omnivorous approach to music. “You play with The Black Crowes or Phil Lesh for a year, and it’s inevitable that some of that’s going to sort of rub off on you. And I’m grateful for that,” he adds with a laugh, “because as it turns out, I really love their music.”

Jackie recently entered into a partnership with Blue Rose Music, a venture that allows him to record and release music with greater artistic freedom than a traditional label allows. The first release for Blue Rose, the EP, The Modern Lives – Vol 1,  was released in 2017 and accompanied by a music video that was animated by the king of indie animation, Bill Plympton.  The Modern Lives – Vol 2 along with an animated short film will follow in 2018.

Between the potency of his richly detailed songwriting, his intensely emotional, soulful vocals and his piercing, expert guitar work, New Orleans’ Anders Osborne is a true musical treasure. He is among the most original and visionary musicians writing and performing today. Guitar Player calls him “the poet laureate of Louisiana’s fertile roots music scene.” New Orleans’ Gambit Weekly has honored Osborne as the Entertainer Of The Year. OffBeat named him the Crescent City’s Best Guitarist for the third year in a row, and the Best Songwriter for the second straight year. Osborne also won Song Of The Year for his composition, Louisiana Gold.

“I love the way this record comes out stout and determined right out the gate, a four-piece rock & roll band making beautiful and conquering noise,” says Osborne.   “The producer, Mark Howard, has a way of making you play in the moment and being confident.  His sounds and engineering style is that of classic records, with his own special sauce of ‘haunting’ on top of it.  The musicians on here are undoubtedly some of my absolute favorites in the world, both as players and as people. Their contributions are invaluable.  Scott Metzger, Brady Blade, Carl Dufrene, Chad Cromwell, Marc Broussard, David LaBruyere, Rob McNelley & Justin Tocket. Bad boys!  I’ve been wanting to make this record for several years and I am stoked it’s finally here.”

A powerful live performer, the musician has won over fans through non-stop touring as well as a heralded collaboration with the North Mississippi Allstars & Southern Soul Assembly.

Jambands.com said, “Osborne finds a striking balance of muscle and grace that allows for the smaller moments of quiet to be just as resounding as the sonic booms.”  And USA Today has praised his music, saying “The relentless approach amplifies the anguished lyrics, which appear to be about the death of a loved one or a relationship torn asunder or perhaps a spiritual crisis.”  In a review of Spacedust & Ocean Views, Boulder Weekly said the album “finds the guitarist in a (largely) reflective mood, an extended meditation on place and moments in time, memory, passages through and exits from paragraphs in the non-fiction docudrama of life.  Through languid, gently formed figures, Osborne coaxes odes of gratitude and compelling imagery in what seems a little like a travelogue — like watching his kid chasing seabirds on the beach…”

Osborne has earned hordes of new fans. He has toured virtually non-stop, either with his own band, as a solo artist, or as a guest with his countless musical admirers, including Toots and The Maytals, Stanton Moore, Derek Trucks, Warren Haynes, Keb Mo, The Grateful Dead’s Phil Lesh, Jackie Greene and Karl Denson’s Tiny Universe. He’s produced and played on critically acclaimed albums by Tab Benoit, Johnny Sansone and Mike Zito.