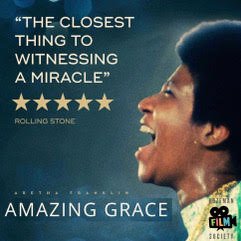 “Everybody deserves to have Aretha Franklin take them to the moon. Don’t bother with tissues. Bring a towel.” Wesley Morris, New York Times

In January 1972, legendary singer Aretha Franklin gave two days of gospel
performances at the New Temple Missionary Baptist Church in Watts, Los Angeles,
recording what would become the best-selling album of her career, Amazing Grace.
The sessions were captured by a film crew led by young director Sydney Pollack, but the footage wound up shelved for decades and has remained one of the lost cinematic treasures of twentieth-century music. Until now. Before Pollacks’s death in 2008, he expressed a wish for the film to be completed, and producer Alan Elliot took it up as a passion project. The electrifying resurrected footage in Amazing Grace transcends the decades that have passed since its filming, transporting viewers into the pews of that church in South Central Los Angeles, where The Queen of Soul brought down the house with the help of Reverend James Cleveland and the Southern California Community Choir over two mesmerizing evenings. Franklin’s fervent, joyful, soul- shattering voice soars and fills the room, imbuing the church audience with an ever- escalating energy to match her own, lifting everyone around her to dizzying heights of ecstatic excitement.